For each class of fire, the fuel, heat source, and chain reaction varies. This is why there must be different types of fire extinguishers depending on the class of fire. For instance, while a class A fire can be safely extinguished with water, a class C fire cannot, as water would conduct the electricity and risk harm to the operator. 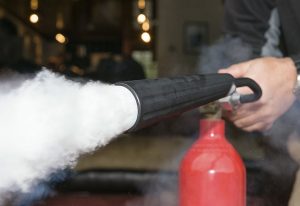 A powder extinguisher sprays a very fine chemical powder composed most commonly of monoammonium phosphate. This acts to blanket the fire and suffocate it.

Powder extinguishers are effective for class A, B, and C fires, since it is not an electrical conductor and since it can effectively break the chain reaction in a liquid or gas fire, something a water extinguisher cannot do.

A carbon dioxide fire extinguisher (CO2) is one of the cleanest types of extinguishers to use as it leaves no residue and requires no cleanup.

The CO2 extinguisher does exactly that – extinguishes CO2. By doing so, it removes oxygen from the fire, effectively suffocating it of oxygen. It is perfect for use on class B fires that involve flammable liquids and on electrical fires.

The wet chemical extinguisher is a specialized type primarily focused on class K fires, those involving cooking media such as animal and vegetable fats or oils.

These extinguishers contain a solution composed of potassium that effectively launches a two-pronged assault on fires.

First, the liquid mist it sprays acts to cool the fire. Second, due to the chemical reaction of the solution with the cooking medium, a thick soap-like substance forms, sealing the surface of the liquid to prevent re-ignition.

The wet chemical extinguisher, then, is ideal for a kitchen setting and class K fires. However, it can also be effective for class A fires where a material such as wood or paper has caught fire.

The most versatile of the set, the water mist extinguisher, uses a newer technology that works across most classes of fire.

This type of extinguisher releases microscopic water molecules that fight the fire on a variety of levels. First, because so much water is dispersed in such a microscopic fog-like form, the level of oxygen in the air is decreased, which helps to suffocate the fire.

Second, the water particles are drawn to the fire and, as water always does, acts to cool it, reducing the temperature.

Finally, and perhaps what is most unique about the water mist extinguishers, is that the water has been de-ionized (the minerals have been removed). As a result, it can actually be used on electrical fires, as the de-ionized water will not act as a conductor. In addition, it can be used on burning liquids and gases that a standard water extinguisher could not be applied to.

Thus, a water mist extinguisher is safe and effective for use on classes A, B, C, and K fires.

Foam fire extinguishers are suitable for class A and the flammable liquids of class B, though not effective for gaseous fires.

They spray a type of foam that expands when it hits the air and blankets the fire. This blanket prevents the vapors from rising off the liquid to feed the fire, thus starving it of fuel. Also, because the foam is mixed with water, it has a cooling effect as well.

Foam extinguishers are some of the best for liquid fires, such as gasoline fires, but can also be used on Class A fires involving solid combustibles like wood.

A clean agent fire extinguisher is a type of gaseous fire suppression. Stored in its liquid form, when it is sprayed and hits the air, it converts to its gas form which is non-conductive, safe for use while humans are present, leaves no residue, and has a very short atmospheric lifetime, making it eco-friendly.

The gas, often composed of Halon, extinguishes fire by reducing the oxygen levels and impeding the chain reaction. Because it is non-conductive and so clean, it is ideal for rooms or businesses filled with electrical and computer equipment. They are most commonly used for class B and C fires.

How Do You Use a Fire Extinguisher 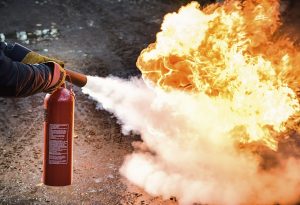 Before using a fire extinguisher, make sure the following criteria apply:

The most common way to properly use a fire extinguisher follows the PASS method: