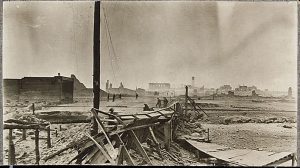 On September 1, 1894, a wildfire destroyed Hinckley and many neighboring villages, causing one of Minnesota’s biggest natural catastrophes.

The official death toll from the Great Hinckley Fire is 418, with many victims buried in mass graves beneath the monument. It is the second-deadliest Minnesota natural catastrophe on record, after only the 1918 Cloquet-Moose Lake fire (453 deaths).

East-central Minnesota saw a dry, dusty, and smoky summer in 1894. Massive logging operations have left behind enormous slash heaps, stumps, and sawdust. Small wildfires were widespread as a result.

Residents may have been comfortable when two additional fires broke out on September 1.

On that day, “Hinckley suffered a temperature inversion, as a layer of cooler air held the warmer air beneath,” a local reporter wrote in a piece commemorating the fire’s centenary. “A garbage fire erupted, but the heat and smoke were contained beneath the inversion.” A bush fire also erupted, aided by the increasing wind. The fires eventually fused, and the resultant conflagration was powerful enough to pierce the layer of colder air. Cooler air rushed in to take the place of the hot air, fanning the flames and increasing the conflagration. Hinckley’s residents were in the midst of a firestorm.”

Residents of Hinckley and surrounding towns had little time to flee, yet there were stories of bravery. Despite the inferno, the crews of two trains were able to transport hundreds of people to safety. Others sought refuge in adjacent bodies of water, rivers, and marshes.

Many individuals, however, were unable to outrun or escape the raging flames. The fire scorched hundreds of square miles in only a few hours.

After the fire, relief supplies came in from neighboring towns, and Hinckley was soon rebuilt.

And there are still remnants of the fire in the region, barely beneath the surface.

“Even today, when you dig into the earth around Hinckley, it’s interesting to see where the fire line (of ash) actually was,” the manager of the Hinckley Fire Museum said. “It’s about a foot underground, but it’s still there.”