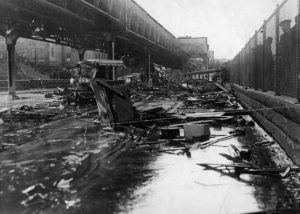 January 15, 2021, was the 102nd anniversary of the Great Molasses Flood, which happened in the North End neighborhood of Boston. Over 2 million gallons of molasses burst from a storage tank and rushed down Commercial Street, at a speed estimated at 35 mph. 21 people died, about 150 were injured, and buildings and railway infrastructure were damaged or destroyed. For decades, residents claimed to be able to smell molasses on hot days, from molasses that seeped into the ground – and perhaps even to this day.

The molasses was stored in a steel tank that was about 50 feet high and about 90 feet in diameter. Analysis soon after the Great Molasses Flood, and more recent studies, suggests that the tank was made of steel that was much too thin for the load of the mass of molasses it stored. While patents from prior to 1900 are not always easy to search, research shows that there were many patents issued prior to the Great Molasses Flood for storage tanks: some steel, some concrete, and some made for storage of liquids such as molasses, water, natural gas, or oil, and some for storage of solids such as ores, grain, or coal.

After the Great Molasses Flood, and into the 1940’s and beyond, patents for steel storage tanks proliferated, especially for above-ground and below-ground storage of oil and gasoline. 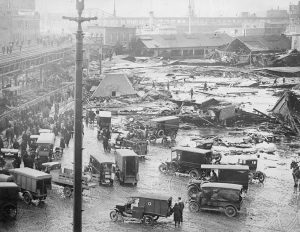 After the Great Molasses Flood, residents and relatives of the injured and deceased people brought one of the first Massachusetts class-action lawsuits against the owner of the facility. The United States Industrial Alcohol Company, in the end, paid out $628,000 in damages, which would be about $9.5 million in buying power in 2018 dollars (according to the US Bureau of Labor Statistics’ CPI inflation calculator, others put the current buying power at between $9.1M and $10.3M) . The lawsuit helped to bring about improved corporate regulation.