The Worst Maritime Disaster In American History: The Wreck of the Steamboat Sultana 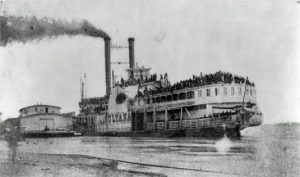 The Sultana was 260 feet long and 42 feet wide, with a capacity of 375 passengers and crew. It already had about 180 private passengers and crew on board, but by the time more than 2,000 paroled prisoners, their Union Army guards, a few Confederate soldiers returning home, and members of the United States Sanitary Commission boarded, the boat left Vicksburg with around 2,400 people on board – more than six times its capacity. There was only standing room. Many of the recently released inmates were so ill or damaged that they had to be carried aboard. Nonetheless, the men were relieved since they were on their way home.

Unfortunately, the worst was yet to come. The overloaded Sultana sailed from Vicksburg upriver to Memphis, Tennessee. The river was flooded since the snow in the north had melted, and the boat fought against the currents with its heavy cargo. The boat arrived in Memphis, and several of the men stepped off to explore the city. Late that night, they re-boarded the boat and resumed their journey upriver. The Sultana burst and caught fire approximately seven miles upriver from Memphis about 2 a.m., while most of the crew were asleep. Some subsequently claimed that Confederate soldiers sabotaged the Sultana, but the U.S. authorities found that the boilers that heated water for the steam engines had exploded due to a faulty design and the heavy load of its human cargo.

Fires generated in enclosed chambers heated water until it changed to steam, and the pressure of the steam-powered turbines, which propelled water wheels, propelled the boat. A breach in the tubes carrying the super-heated water led the Sultana’s boilers to explode, destroying surrounding portions of the boat and dumping hot water and flaming embers on the sleeping passengers. The blast killed some people instantaneously. Others awoke to find themselves in the air and had no idea what had happened. They were asleep one minute and straining to swim in the very cold Mississippi River the next. Some passengers burned on the boat. The fortunate ones clung to debris in the river or to horses and mules that had escaped the boat, hoping to make it to shore, which they could not see because it was dark and the flooded river was at that point almost five miles wide. 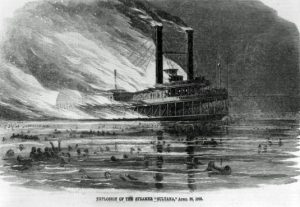 Approximately 1,700 individuals died out of the estimated 2,400 persons on board. The Sultana is still remembered as the worst maritime tragedy in American history. More people perished than in the Titanic disaster in 1912. There are several reasons why the Sultana catastrophe is not well-publicized. The Civil War had just finished, and President Abraham Lincoln had been assassinated, and Lincoln’s murderer, John Wilkes Booth, had been killed the day before the Sultana catastrophe. Furthermore, the American people had gotten accustomed to hearing about large-scale casualties as a result of the war’s battles. A steamboat disaster was insufficient to make headlines. The Sultana tragedy is almost seldom addressed in history texts.

The majority of the people who survived did so by floating on pieces of the boat until they could reach land or be rescued. When they were healthy enough, the survivors were transferred to other vessels and taken north, where they eventually returned home. The Sultana sank to the bottom of the Mississippi.