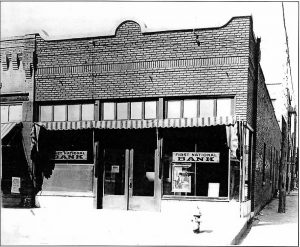 The heist took place on December 23, 1927, at the First National Bank in Cisco, Texas, in central Texas. Marshall Ratliff, Henry Helms, Robert Hill, all ex-cons, and Louis Davis, a cousin of Helms, were the perpetrators. The manhunt that followed was the biggest in Texas history.

During this time, Texas had three to four bank robberies every day. A $5,000 reward had been offered by the Texas Bankers Association to anybody who shot a bank robber during the robbery. Ratliff had previously lived in Cisco and knew he would be recognized, making the situation much riskier for the would-be robbers.

As a result, Ratliff borrowed a Santa Claus suit from the boarding house where the outlaws were staying in Wichita Falls, Texas. His accomplices let him out of their stolen automobile a few blocks from the bank in Cisco, and he smiled and talked to youngsters who were eager to see Santa. The street was bustling with people who were getting into the Christmas mood. When Santa came coming down the street at midday, accompanied by children, no one thought it was strange. Ratliff encountered the other three villains in an alley and led them inside the bank, still trailed by children.

“Hello, Santa,” the bank teller remarked but received no answer. A few customers were making deposits at the teller’s window. “Hands up!” screamed Ratliff’s accomplice, Robert Hill, as he entered the bank, revolver in hand. The other two criminals, who were also flashing firearms, followed him in.

Ratliff walked into the cashier’s cage, unlocked a drawer behind the counter, and pulled out a revolver, which he placed under his Santa outfit. Then he told the assistant cashier to unlock the safe and start putting money and bonds into a sack he’d placed beneath his disguise while the others shielded the customers and personnel.

Mrs. B. P. Blassengame and her six-year-old daughter entered the bank, unaware that a robbery was taking place. When she saw what was going on, the brave mother ran through the bank’s bookkeeping office with her kid and escaped through a door to the alley, ignoring the thieves’ threats to fire. She then hurried to city hall and the police department, begging for aid and informing Chief of Police Bedford and many others about the heist. 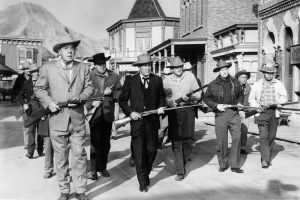 It’s unclear who fired the initial shot, but a torrent of gunfire erupted as a crowd of gun-toting people gathered outside the bank, maybe hoping to cash in on the $5,000 prize for shooting one of the criminals. One bandit was “whirled about” by a rifle bullet that wounded him in the arm. A client was wounded in the leg, and a cashier was shot in the jaw.

All of the occupants in the bank were forced out the door and into the alley, where the thieves had abandoned their blue car. As they exited, some of these folks were injured. The majority of the customers were able to flee, but the bandits took two young girls captive and used them as shields while fleeing in their getaway car.

Chief Bedford and Deputy George Carmichael were both killed in the alley shootout. The criminals’ attempt to flee Cisco turned into a farce. They first discovered they were out of gas after forgetting to fill up the tank beforehand. A gunshot smashed one of their tires as they approached the outskirts of town, chased by an enraged throng. They seized a passing automobile driven by 14-year-old Woodrow Wilson Harris, brandishing their pistols. During the transfer of the loot, hostages, and seriously injured comrade Louis Davis to the automobile, they were hit by gunfire, and Robert Hill was also hit. Then they realized they couldn’t start the automobile because the driver, a young man, had snatched the keys when told to halt.

Davis had passed out by this point, so they left him in Harris’s car and returned to the first car with their two captives. They didn’t know they’d left the money with Davis until much later. They had taken $150,000 in non-negotiable securities and $12,400 in cash.

The hunt was momentarily halted when a throng of residents discovered Davis and the money. They returned the money to the bank, which had been robbed and had at least 200 gunshot holes. Six civilians were also injured in the gunfight, in addition to the two police officers. Davis had never committed a crime before joining the gang at the last minute. He was rushed to a hospital in Fort Worth and treated, but he died as a result of his injuries.

The three thieves who remained had dashed along Main Street, shooting at their pursuers. They fled into a meadow by swinging east on a gravel road, evading cactus, mesquite, and scrub oak until the growth became impenetrable. They continued on foot after being forced to leave their bullet-riddled automobile a few miles outside town, leaving the two young captives behind.

Sheriff John Hart of the county seat, Eastland, was summoned. He and his deputies rushed to the location where the criminals had abandoned their vehicle. In another car, reporters, including Boyce House, followed. According to House, “Officers and residents from all over the state flooded in, and a manhunt, unlike any Western Texas, had ever seen was soon underway. Many members of the posse were riding horses or walking through clumps of trees, searching high grass in ravine bottoms, and peering behind stones in valleys.”

The fugitives eluded search forces and stole another automobile the next morning, despite bloodstained rags and clothing being uncovered. The three bank thieves were eventually apprehended following a week-long manhunt. Ratliff was dubbed a “walking arsenal” because he was arrested with six gunshot wounds and six firearms, including the one he seized from the bank. “Santa” had been apprehended, and after killing one of his fellow inmates in an effort to flee the Eastland County jail, he was dragged out and lynched by an enraged crowd.