The San Francisco Earthquake Of 1906: An Insurance Perspective 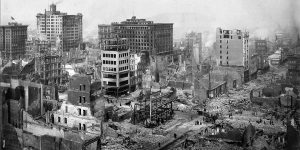 The earthquake and fire that devastated San Francisco on April 18, 1906, was one of the most significant natural disasters in the United States, as well as in the history of insurance. It produced insured losses of $235 million at the time, equivalent to $6.3 billion in today’s dollars. In 1906, just as today, shake damage from earthquakes was excluded from standard property insurance policies. Damage from the fire which followed the earthquake was covered and constituted the vast majority of insured losses.

In the 100 years since the earthquake, San Francisco has grown and prospered. But the threat of a similar disaster remains. What if it were to happen again? Estimates of insured losses range from $30 billion up to $105 billion. 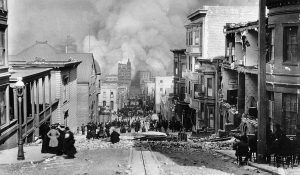 According to the USGS Earthquake Hazards Program estimates, 1906-type earthquakes occur at intervals of about 200 years. Thus, it is unlikely (a 2 percent chance) that a quake of the same magnitude (estimated at 7.7 to 8.3) would happen in the next 30 years. However, scientists predict that there is a 60 percent chance that a strong, magnitude 6.7 or higher, the quake will hit the area within the next 30 years

Though commonly known as the San Francisco earthquake, the impact of the 1906 quake in fact stretched from southern Oregon to south of Los Angeles and inland as far as central Nevada; however, with the ensuing fires in the city, the majority of the fatalities occurred in San Francisco proper. Current estimates put the total death toll at over 3,000, well over the traditionally cited figure of 700-800.