The Iroquois Theater Fire of 1903 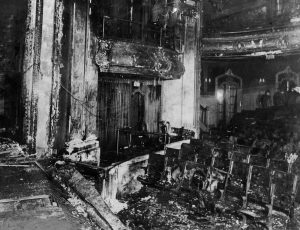 The Iroquois Theater presented Mr. Bluebeard, a musical comedy, to a standing-room-only crowd of over 1,900 people on December 30, 1903. Another 400 performers and stagehands were crowded into the basement dressing rooms and backstage areas. Halfway through the show, a floodlight over the stage exploded, setting fire to the red velvet curtain. The fire quickly spread to the oil-painted wood and canvas set pieces hanging in the catwalks, and soon flaming debris was falling onto the stage. Despite pleas from the show’s star to remain calm, the audience panicked and attempted to flee the theater, just as smoke began filling the auditorium. Unfortunately, the fleeing audience members did not get far. Many of the exits were locked or hidden behind heavy, decorative curtains. Other doors were unlocked but only opened inward, trapping the victims in the jam-packed hallways. Illegal, accordion-style metal gates even trapped some theatergoers that the theater management locked during the shows to keep audience members in the upper balconies from sneaking downstairs to better view the show. As the flames spread into the auditorium, hundreds of theatergoers were burned to death, while hundreds more trapped in the hallways suffocated from the smoke. 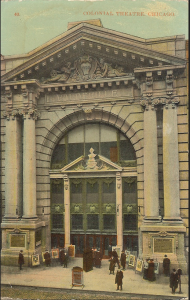 As there was no fire alarm in the theater, a stagehand had to run to the nearest firehouse to report that the theater was in flames. When the first firefighters arrived at the theater, they found it difficult to enter the auditorium because of the number of bodies stacked up at the doors. Once inside, they quickly doused the flames. The fire had already consumed most of the flammable materials in the theater. Once the fire was out, one firefighter shouted: “If there is any living person in here, groan or make a sound.” His request was met by silence.

In the end, 602 people, mainly women, and children were killed in the fire. At one locked exit, firefighters counted 200 bodies stacked ten high and twenty deep. The subsequent investigations into the fire uncovered numerous troubling facts, including the lack of sprinklers and fire alarms and the locked exits.

The legacy of the Iroquois Theater Fire is not in the infamy held by the number of lives it claimed but in the lasting effect that it has had on fire regulation standards. The fiery tragedy stemmed not from one single problem but from many factors, including bribery and blatant ignorance of the fire code of the time. As a result, Chicago tightened building codes, including mandating clearly marked exits and swing-out doors for every public building in the city, setting the standard for the rest of the nation.