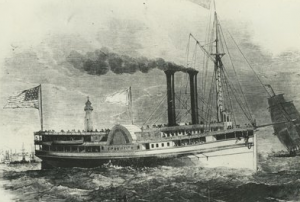 Beginning in the 1840s, lumber, coal, iron, and agricultural products were hauled by boats over the Great Lakes. As an example, iron ore from the upper lakes region was carried east on ships that returned filled with coal from Pennsylvania. The early ships that traveled the lakes helped build the great cities of Cleveland, Chicago, and Detroit, among others. The lake boats were the economic catalyst of the entire Great Lakes region.

Shipwrecks in the Great Lakes seemed to have been not an uncommon occurrence. During the infamous 1850 Great Lakes shipping season, the largest of all 1850 disasters occurred on June 17th. The burning of the steamer G. P. Griffith about twenty miles east of Cleveland cost 286 lives to be lost. Some estimates I’ve seen put the total at 326. This was one of the greatest single event losses of life in Great Lakes history.

On the G.P. Griffith, one woman was the sole survivor and what is so surprising about the Griffith loss was that it occurred just three miles from shore. A fire was reported in the hold at about 4 in the morning. One seaman took the wheel and tried to steer the boat to shore but hit a sandbar reportedly only about 600 feet from shore. The vessel burned all the way to the waterline while passengers jumped in the water. Lights could even be seen onshore but with the panic that ensued the shore could have been 100 miles away. Burned bodies would have to be buried on the shoreline, and there they stayed. The G.P. Griffith disaster was not only a Great Lakes boating disaster but it was a tragedy for the mostly German, Irish, English, and Scandanavian immigrants who had traveled so far already just to have their lives snuffed out so close to their intended destinations. Also among the victims were the captain and his family, who were traveling with him.

With the lax regulations in place, boats built of wood, steam boilers that were sometimes left unattended, and the eagerness to race a break time records, it’s almost amazing that there were not more accidents and lives lost during the mid-1800s. It’s estimated that the Great Lakes are home to some 8,000 shipwrecks, and about 2,000 of them are located in Lake Erie. One hundred and fifty years ago, Lake Erie would have looked like a traffic-jammed street. Lake Erie, for centuries, was a bustling water highway. It’s reported that the majority of the Great lakes shipwrecks have not been discovered even to this day.