Should you carry Sinkhole Coverage? 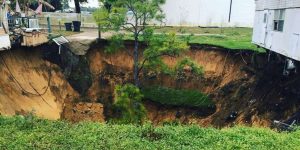 The amount of water in an aquifer is what causes sinkholes. When the limestone located beneath the surface of most of Florida dissolves, whether it be from too little or too much rainfall, the chances of sinkhole formation increases. And in Florida, extremes in rainfall are a way of life.

Homeowners throughout the southern part of the state are concerned about sinkholes, and rightfully so. Not only have sinkholes swallowed cars, houses, and people, often without a trace, but they also occur without any warning whatsoever. There could be a sinkhole right beneath your home, and you may not know it. While you can’t prevent a sinkhole from occurring, there is something you can do to protect yourself financially. You should add sinkhole coverage to your existing home insurance policy.

Sinkhole Coverage is Not a Standard Insurance Policy Addition 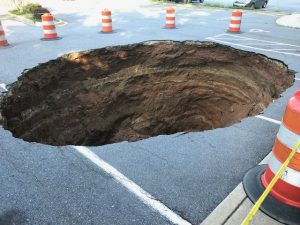 What Does Sinkhole Coverage Include?

Usually, this type of additional coverage includes not only coverage for damages directly related to sinkholes, which includes losses to the structure and even the contents located within that structure. As well, sinkhole insurance coverage also includes the cost to repair the damaged home, as well as the stabilization of the land beneath a home as well as repairs to a home’s foundation.

Keeping an eye out for the ‘symptoms’ of a sinkhole may allow you to get coverage before it’s too late. The best place to check for sinkhole symptoms is in your home’s foundation, as they will appear in the same way that foundation issues do.

Cracks in any sidewalks, driveways, and walls in or on your property are one of the signs. Uneven floors may also signal a sinkhole, as may windows and doors that have become increasingly difficult to close. Even water stains and higher utility bills can be a sign that a sinkhole could be imminent.

After having identified any of the above, it may be a good idea to contact your insurance company right away, because they can then come out to inspect your property for any damage. But it’s also recommended that you contact an insurance adjuster. Their knowledge and finesse with communicating with your insurance company are priceless, especially in a situation where a sinkhole could swallow everything you own.