One of Pennsylvania’s Most Devastating Tragedies: The Great Johnstown Flood of 1889 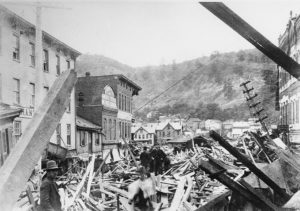 One of the most devastating tragedies ever to afflict Pennsylvania was the “Great Johnstown Flood” on May 31, 1889. The amount of property destroyed and the number of lives lost was unprecedented.

Pennsylvania is especially susceptible to floods. The state is on several “major west-east storm tracks.” Its average of forty-two inches of rainfall annually is deceiving, for at times, large amounts of rainfall in single storms. Some of the precipitation comes in the form of snow, large quantities of which melt suddenly either when the average January temperature of twenty-nine degrees rises suddenly during a warm spell or in the spring thaw. The state’s major rivers and many of its streams have shallow beds that flow through flat land, limiting the amount of water they can hold. Before the European settlers arrived, trees covered 95% of the state, preventing heavy runoff during storms. Large-scale lumbering during the 1800s removed this barrier along many waterways. As a result, severe floods that caused significant loss of life and property damage have occurred throughout the state, including Johnstown, during the past two centuries.

Several of these conditions contributed to the “Great Johnstown Flood of 1889.” The town had grown rapidly from 1,269 in 1850 to nearly 30,000 in 1889. Stony Creek, the Little Conemaugh River, and the Conemaugh River that flowed through the town became narrower for different reasons. Personal and industrial waste was deposited into these rivers, and officials of the Pennsylvania Railroad and the Cambria Iron Company who wanted more space for their operations filled parts of them.

Nevertheless, the “Great Johnstown Flood” differed from others there and elsewhere in that on May 31, 1889, twenty million tons of water that formed a wall thirty-six feet high traveled fourteen miles going approximately forty miles per hour struck the town. The water came from Lake Conemaugh, 450 feet above Johnstown, when the earthen dam gave way. Known initially as the Western Reservoir or the South Fork Dam, its original purpose was to provide water for the Pennsylvania Canal, part of the state transportation system that carried passengers and freight between Philadelphia and Pittsburgh. When completed in 1852, it was thought to be the largest dam of its type forming the most extensive reservoir in the United States. The dam was seventy-two feet high, 931 feet long, and formed a lake over sixty feet deep that covered an area two miles long.

As for the vast majority of Johnstown’s residents, the heavy rains of May 1889, the storms of the month’s last few days, and the rising water in the streets seemed not to alarm them. They had experienced previous floods that had spawned rumors that the dam would break. Little did they know what awaited them on the afternoon of May 31.

At 3:15, the dam gave way, releasing the massive amount of water that raged downstream as if Niagara Falls had collapsed. Within a half to three-quarters of an hour, the entire lake emptied. The wall of water that seemed more like a “rolling ball” struck first the towns of South Fork, Mineral Point, East Conemaugh, and Woodvale, wiping out most of them. Then, it hit Johnstown at 4:07, destroying four square miles of the city in about ten minutes. Approximately 1600 homes and 280 businesses, including much of the Cambria Iron Company, were leveled. Railroad cars and even locomotives were lifted, over-turned, and carried by the water; their tracks uprooted and twisted. The damaged and destroyed property was valued at $17 million, more than $300 million today.

More tragic was the loss of life. Over 2,000 people were killed, and 900 were listed as missing. 99 entire families were lost, and nearly 400 children under ten were killed. Many victims drowned when their homes were swept away. Others were burned to death when they were thrust into the debris that was held by the stone bridge at the juncture of the Stony Creek and the Little Conemaugh River, and the tangled mass caught fire.

By the next morning, Saturday, June 1, the waters had gone down, and the clean-up began. An outbreak of typhoid fever hindered the recovery and added forty more to the death toll. Rescue workers placed sick and injured survivors in emergency hospitals. The dead who could be found were placed in morgues where relatives and friends tried to identify them. One out of three bodies never were identified. Some corpses simply floated away and were located months later in distant locations, one as far away as Cincinnati. Others that could not be found were listed among the missing.

News of the disaster spread rapidly, appearing in some newspapers on Saturday morning. By mid-day, help began to arrive. Nearby farmers brought food and clothing. On Sunday, a relief train from Pittsburgh brought more of the same, as well as a boxcar of coffins. During the following days and weeks, supplies continued to arrive. At first, prominent residents of Johnstown coordinated the efforts; however, state officials ordered Adjutant General Daniel Hastings and 500 national guard troops to control the city from June 8 to July 12, which helped propel Hastings to Pennsylvania’s governorship in 1895. The Western Union Telegram shown here is typical of many sent to him from concerned family members anxious for news of loved ones during the days following the flood. During the next few years, the survivors rebuilt their shattered lives and city.

In the aftermath of the “Great Johnstown Flood,” the question of responsibility for the disaster emerged. The consensus was that the South Fork Hunting and Fishing Club officials were responsible because they failed to keep the South Fork Dam in a safe condition. Hastings charged them with “criminal negligence.” The headline of a Chicago newspaper editorial on the flood was entitled “Manslaughter or Murder?” It is certain that if the club’s dam had not given way, the heavy rains would have caused just another incident of water in the city’s streets; the tragedy would not have occurred. Despite public accusations, conclusions of coroners, juries, and numerous lawsuits, the club never was forced to take the blame, nor did it voluntarily accept responsibility.