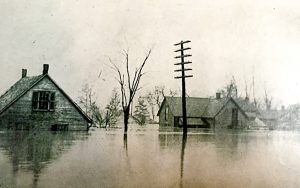 The first storm in a system that caused the Great Dayton Flood began on Good Friday, 1913, with the heavy rains starting on Easter Sunday, March 23. By the morning of March 25, the countless rivers and streams in this area started rising, eventually killing nearly 400, displacing 65,000, and causing tens of millions of dollars in property damage.

While the majority of the damage occurred in Dayton, areas in Mad River and Bethel Townships did not escape the impact, as the Mad River rose out of its banks along with its many feeder creeks and tributaries. The flood did not directly affect the old settlement of Osborn, along present-day Haddix Road. Still, the village was relocated several years after the flood, as its location was deemed to be part of the newly-formed Miami Conservancy District’s Huffman Flood Plain. Instead of abandoning their homes, the residents of Osborn relocated their 400 homes several miles south to the town of Fairfield. Several years after the move, the residents of Fairfield and the former Osborn decided to centralize, deciding on the name Fairborn in honor of the two towns.

The Miami Conservancy District, which was formed in the wake of the Great Flood, began construction on its flood control system in 1918. The total cost of the completed project exceeded $32 million. The district is credited with keeping major floods from Dayton’s doorsteps and is reported to have saved the area from significant flood damage more than 1,500 times.

The Mad River near the confluence of Lower Valley Pike and Route 4 near the Masonic Home was measured at 16.9 feet during the peak of the 1913 flooding.