How Property Insurance Helped Victims After The Great Chicago Fire 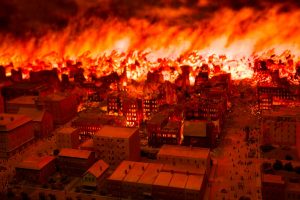 When the worst imaginable disasters strike, insurance can be there to aid in the recovery process. For example, after the Great Chicago Fire wreaked havoc on the city in 1871, hundreds of dead and thousands of buildings were destroyed. Though the fire was devastating, victims relied on essential coverage like property insurance to help them get back to their lives.

What Was the Impact of the Great Chicago Fire?

The Great Chicago Fire of 1871 only burned for three days, from October 8th through October 10th, 1871. However, that was more than long enough to cause a great deal of destruction. Several theories exist as to what caused the start of the fire, which originated in resident Catherine O’Leary’s barn. The actual cause of the fire remains unknown, but the impact of the catastrophe is still observed today.

Some stats about the Great Chicago Fire:

Who Provided Help to the Victims of the Great Chicago Fire?

Chicago received $5 million in donations from around the world to help the recovery. In addition, former Chicago Mayor Roswell B. Mason, Common Council President Charles C.P. Holden, and a group of elected officials and respected residents formed a Relief Committee following the fire to organize and distribute food, essential supplies, and money to victims of the fire.

How Did Property Insurance Help Victims Get Back to Their Lives? 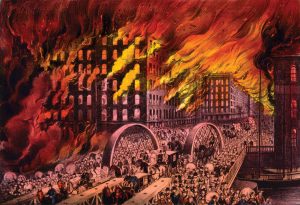 Naturally, fire is one of the main perils covered by homeowners insurance. Standard homeowners policies across the map include coverage for damage and liabilities caused by fires. The fire protection included in homeowners insurance covers not only the structure of the home but also personal property stored inside of it and detached structures like sheds or garages.

No matter where you’re located in the country, your homeowners’ policy should automatically include protection against fire damage since fires are one of the main concerns insurance companies have. But without homeowners insurance, victims of a fire like the Great Chicago Fire would have to pay for the damage out of pocket. So talk to your insurance agent to get your home set up with all the coverage it needs against fires and other disasters.