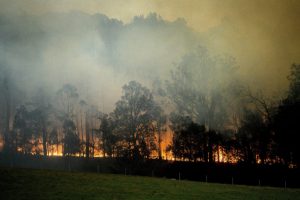 The insurance industry’s loss footprint for the Australian bushfires of 2019/2020 is estimated at US$1.3 billion (A$1.9 billion), according to PERILS, the independent Zurich-based organization providing industry-wide catastrophe insurance data.

The industry loss data cover the peak period for the bushfires which occurred during the turn of the year, said PERILS, noting that the figure is based on detailed loss data collected from the vast majority of the Australian insurance market.

The claims figure of US$1.3 billion (A$1.9 billion) compares to PERILS’ earlier loss estimates of US$395 million (A$568 million) which were issued on Feb. 17 and April 6, 2020, respectively. Due to the industry challenges posed by the coronavirus pandemic, PERILS explained it did not carry out a second round of data collection prior to issuing its report on April 6, so the estimate was unchanged.

The industry loss footprint applies the dominant event definition clause used in the Australian re/insurance market and covers the peak losses which occurred within a period of 168 consecutive hours (seven days) on Australian territory. The peak seven-day loss period differs among insurers but generally lies between Dec. 20, 2019 and Jan. 6, 2020. For the majority of insurers, it is between Dec. 30, 2019 and Jan. 5, 2020.

The industry loss report includes a detailed breakdown of property and motor losses by postcode, with the data further divided by residential and commercial lines. Loss amounts are provided for buildings, contents and business interruption, while additional granular information including fire intensity metrics and mean damage ratios are also made available.

PERILS said it is the only loss reporting agency that provides insured loss data at this level of resolution and this is the first time it is available for bushfires in Australia.

The fire intensity metrics per postcode are based on satellite data, explained PERILS.

An updated estimate of the industry loss from the Australian bushfires will be made available by PERILS on Jan. 6, 2021, one year after the event’s end date.

This report is released six months after the worst Australian bushfire season on record, known as the “Black Summer,” said PERILS. Bushfires affected the entire continent and resulted in 34 fatalities and burned through an estimated 18.6 million hectares of land between September 2019 and March 2020.

Insurance losses during the New Year peak period were most severe in the state of New South Wales, accounting for 70% of the industry loss, followed by Victoria (17%) and South Australia (13%). As a result of the bushfires, the Federal Government established the Royal Commission into National Natural Disaster Arrangements in February 2020 to examine the bushfire recovery and coordination efforts, as well as to recommend improvements for future response and recovery coordination.

“This industry loss footprint is the first time PERILS has reported a bushfire event in Australia at such a detailed resolution. By providing the bushfire loss data and intensity information on a postcode and LOB level, we believe this can help the insurance industry better understand the impact of future bushfire events,” commented Darryl Pidcock, head of PERILS Asia-Pacific.

“The affected communities have been significantly impacted by these losses and are now facing additional pressures from the coronavirus pandemic. Our thoughts go out to those affected and we hope that they can rebuild their lives as soon as possible,” he added.